This Memorial Day, as we rightfully honor the military men and women who gave their lives winning and protecting our freedoms, let us not forget an often-overlooked remembrance for the thousands of U.S. merchant mariners who also died serving our country in their own selfless ways.

In 1933, by a joint Resolution of Congress and by Proclamation of the President of the United States, May 22 was set aside as National Maritime Day to honor the sacrifices of U.S. merchant mariners during wartime and in peace. Since the founding of our country, thousands of men and women aboard American-flagged merchant ships have supplied the needs of our troops around the world, often becoming a tragic casualty of war themselves. During World War I and II, more than 8,600 merchant mariners perished – the highest rate of casualties of any branch of the military services, according to available records – with thousands more injured and hundreds taken as prisoners of war. Merchant mariners continued serving through the Korean, Vietnam, Gulf War and other conflicts, braving troubled waters and putting their lives at risk to serve their fellow men and women. In the early hours after the 9/11 attacks, it was U.S. merchant mariners who quickly rushed critical supplies to those families trapped in Lower Manhattan.

And most of us never realized it.

Today, merchant mariners continue serving as a vital lifeline to ensure allied forces have the food, supplies and medicines necessary to serve humanitarian missions around the world while delivering the universal hope of freedom. Coordinating with key organizations like FEMA and the Red Cross, U.S. merchant mariners rush critical relief supplies and housing to areas ravaged by hurricanes, earthquakes and other natural disasters. They deliver the generators, wires and poles to rebuild electricity grids after hurricanes throw homes, hospitals and entire communities into darkness. They bring the pumps and equipment to rebuild systems to ensure clean water can flow again. They are a bright and tangible symbol of hope to those who have lost everything.

The service of merchant mariners is evident at the Port of Brownsville, as well. Like the tugboat captains and deck hands, harbor pilots, and officers and crews of all U.S. flagged vessels. On our own anniversary – our 84th on May 16 – we paid tribute to the men and women who work to ensure the steady flow of vital goods serving the entire Rio Grande Valley. It is through their work that steel, grain, fuel, windmill components and so much more flows in and out of the port to destinations around the corner, and around the world. These are the anonymous merchant mariners who serve all of us, day in and day out.

“When the bell rings, the U.S. Merchant Marine answers the call. We climb the ladder, we don’t ask why, we ask how high.”

Today, on May 22 – and every day, in fact – let us remember the U.S. merchant mariners who answered the bell and sacrificed their lives for others. Their legacy, and the continued work of their brothers and sisters today, should be a humbling inspiration of service and dedication for us all. 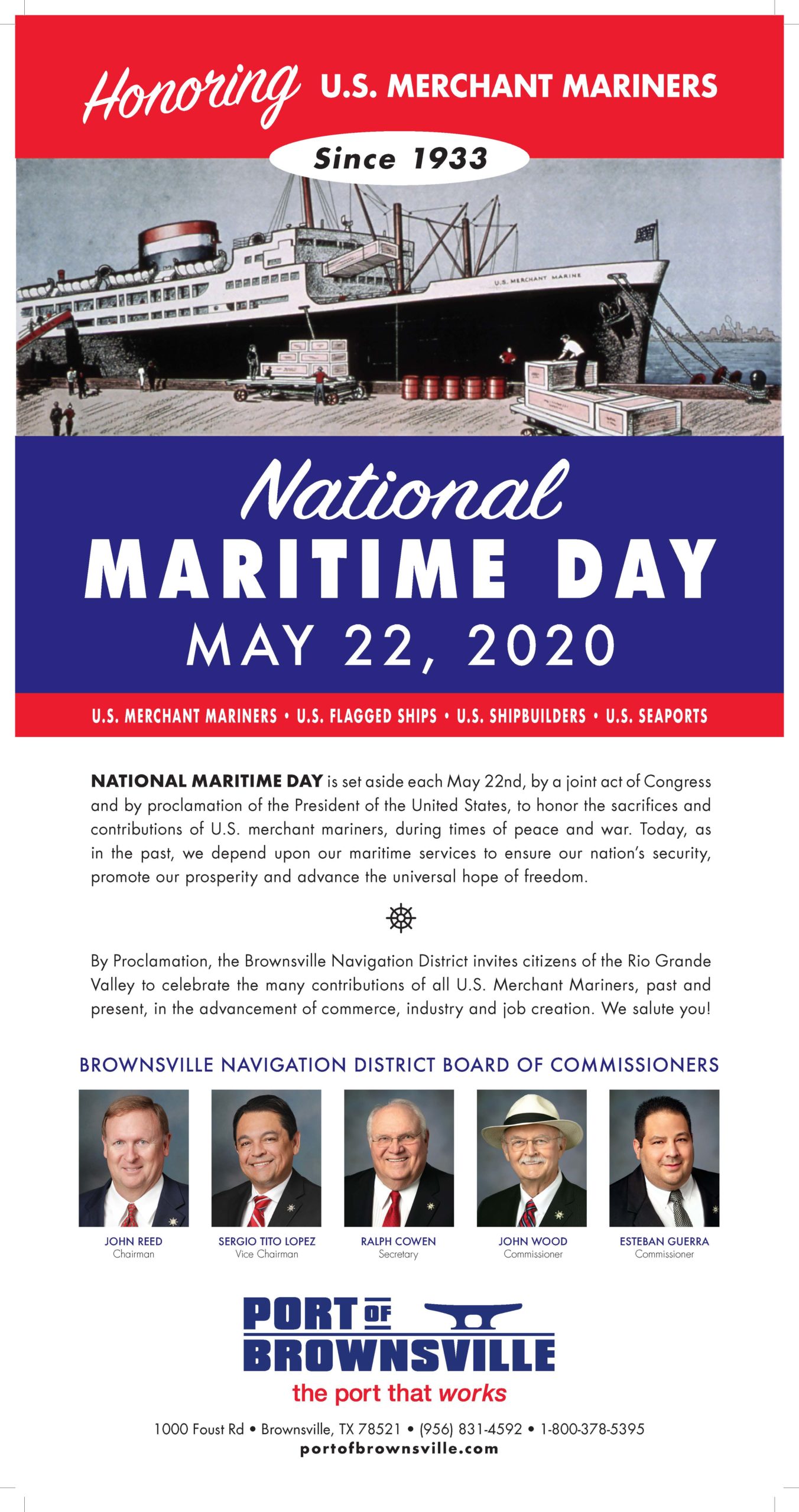