Port of Brownsville Chief of Police Carlos Garcia has been appointed by Governor Greg Abbott to serve on the Task Force on Disaster Issues Affecting Persons who are Elderly and Persons with Disabilities.

Garcia will act as chair of the task force that will study methods to more effectively accommodate persons who are elderly and persons with disabilities before, during, and after a disaster or emergency evacuation. His term is set to expire on February 1 , 2023.

The Port of Brownsville Police and Security Department, led by Garcia, is comprised of 13 sworn police officers, eight security guards, and one administrative assistant. Prior to joining the port, Garcia served as Chief of Police for the City of Brownsville from 2001 until 2011. He is a member of the Texas Police Chiefs Association and the Texas Police Association. He received a Bachelor of Science in Criminal Justice from Pan American University (now UTRGV) at Brownsville and a Certificate of Completion for the FBI National Academy’s 173rd Session. 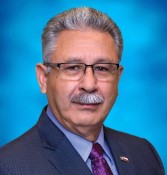