BROWNSVILLE, Texas—John Reed was unanimously elected to serve as chairman of the Brownsville Navigation District (BND) during the board’s meeting Wednesday, May 16, 2018. Local businessman Esteban Guerra also was sworn in as the BND’s newest commissioner, along with John Wood, who served as the previous chairman and was reelected to his second four-year term on the commission on May 5.

Reed is chairman for two years and continues to serve alongside BND Vice Chairman Sergio Tito Lopez, Secretary Ralph Cowen, who were also unanimously elected to the serve as part of the executive board.

Outgoing Commissioner Carlos Masso, who did not seek reelection, welcomed Commissioner Guerra by placing a Port of Brownsville ceremonial lapel pin onto his jacket. Masso served as a BND commissioner for 12 years, including as chairman 2008-2010. 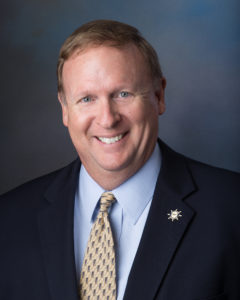