Expanding Capabilities at the Port of Brownsville

Editor’s Note: This article is featured in the latest edition of the Port of Brownsville Directory. Click HERE to view directory or to request a copy.

After years of effort, planning and success, the Port of Brownsville is ready to begin one of its most important infrastructure projects to date, the Brazos Island Harbor (BIH) Channel Improvement Project. The U.S. Army Corps of Engineers and the U.S. Congress have authorized the deepening of the port’s channel from 42 feet to 52 feet. The project may cost upwards of $300 million and construction, divided into two phases, is expected to commence at the end of 2022. Deepening the port’s channel means bigger ships, more cargo, and more jobs for the Rio Grande Valley.

The port expects to pay for the project with a combination of public, private and federal funds. Demonstrating confidence in the public-private partnership (P3) strategy, NextDecade, owner of the proposed Rio Grande LNG natural gas liquefaction plant (largest of the proposed LNGs at the port), announced a landmark agreement with the port in April 2019, agreeing to pay 100 percent of Phase One of the deepening project from the western boundary of its lease site along the ship channel to the channel’s offshore origin (more than nine miles) – or more than half of the deepening project.

In March 2022, the federal government announced the allocation of $68 million to the project. The funds, to be utilized for Phase Two, are provided under the Infrastructure Investment and Jobs Act (IIJA) Appropriations Law. The BIH project was identified as part of the IIJA to strengthen port and waterway supply chains and climate resilience. Once the project is complete the Brownsville Ship Cannel will be one of the deepest ship channels in the Gulf of Mexico.

The Rio Grande LNG and Texas LNG projects have received approval from the Federal Energy Regulatory Commission and await final investment decisions (FID) for construction at the Port of Brownsville, leveraging the port’s unique location, capabilities and land availability as a center for natural gas from West Texas, the Permian Basin and beyond. NextDecade’s Rio Grande LNG project, which includes the Rio Bravo Pipeline, is on target to announce FID on a minimum of two of its proposed five trains in the second half of 2022. The company has taken a number of steps to lower its project’s carbon footprint with plans to achieve carbon neutrality in Brownsville. Texas LNG also is on track to announce FID in 2022. Together, these multi-billion dollar projects could add thousands of construction jobs and hundreds of permanent good-paying industrial jobs to the local economy.

Other continued investments include the completed rehabilitation of Bulk Cargo Dock, improving access to the 3-million-bushel grain elevator operated by WestPlains LLC. In 2020, the U.S. Maritime Administration awarded the port a $14.5 million grant to improve railroad, road and ship-loading infrastructure at the Bulk Cargo Dock and further expand WestPlains’ grain handling operations at the facility. The company and the port are partnering to modernize and enhance the operational capacity of the specialized dock, with shared investments of more than $13 million to date, in an effort to create a new cost-efficient port option for all U.S. farmers to load outbound international vessels from the Port of Brownsville.

The port held a ribbon cutting ceremony March 4, 2022, for the latest commerce route of the Rio Grande Valley, the 1.9 mile-long South Port Connector Road. The $25.6 million project is a partnership of the BND, Cameron County, the Cameron County Regional Mobility Authority, the Rio Grande Valley Metropolitan Planning Organization and the Texas Department of Transportation. The port connector offers direct access to the southside of the Brownsville Ship Channel and an alternate route to nearby commercial lanes at the Veterans International Bridge. It also facilitates the flow of cargo and other goods related to the space industry from port docks to SpaceX’s neighboring facility Starbase.

The expansion of additional outside storage capacity continues at the port, now totaling more than 62-acres of purpose-built facilities to accommodate heavy point-load-bearing cargo, like wind energy nacelles – some weighing more than 112 tons each. Along with hubs, tower sections and windmill blades (the largest reaching 265-feet-long), the Port of Brownsville ranks among the leading U.S. ports capable of receiving, storing and moving these massive components. And due to the prevailing winds of south Texas, combined with the abundance of available land on both sides of the U.S. Mexico border, windmill farms are growing across the region.

Other important infrastructure developments, driven by the demands of growing industries at the port, include rehabilitation of docks and internal roads, utility infrastructure, among others. 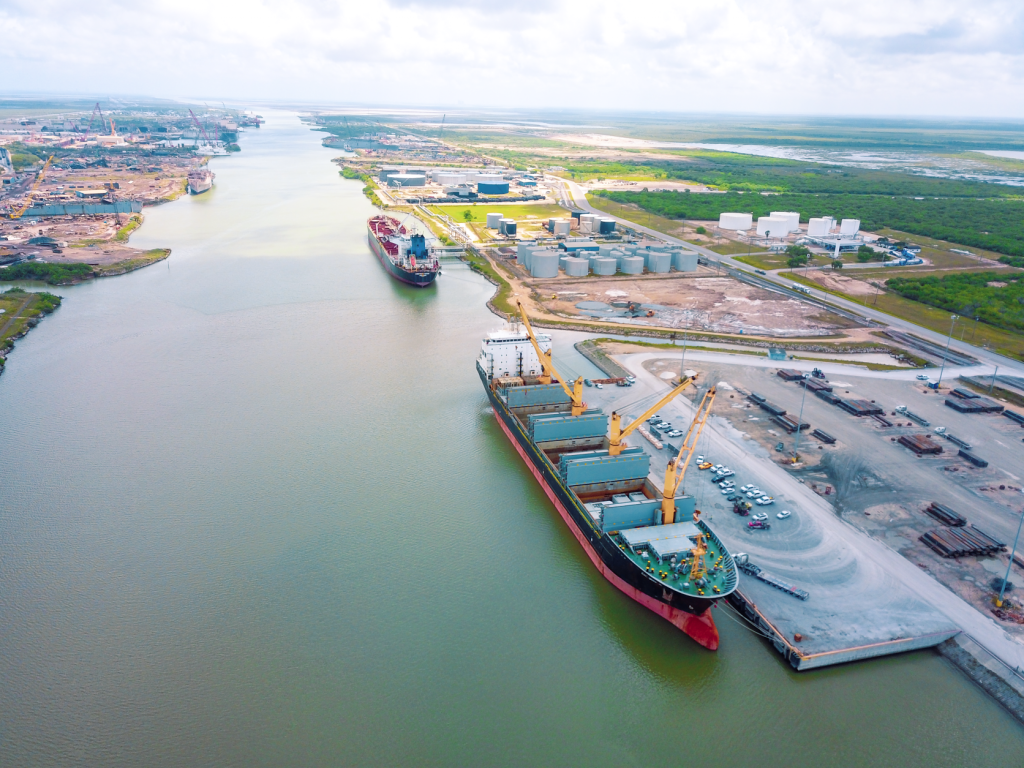 The Port of Brownsville is open for business, witnessing the uninterrupted flow of commodities to service a wide range of industries across North America. The port continues to prove itself as one of the most stable seaports in the U.S. to effectively weather today’s unique economic challenges.